A protester in the peaceful Occupy Oakland demonstration, was shot in the head

The world is watching: we are all Scott Olsen! 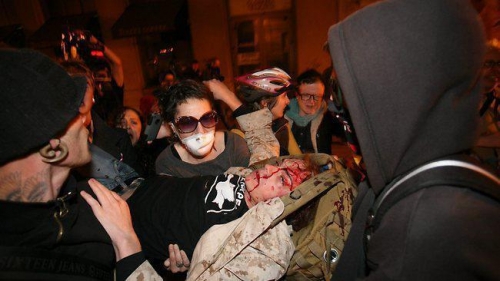 While the Iraq Veteran and Occupy Oakland protester remains in critical condition, let us send a powerful message to those in power: the world is watching!


Yesterday, the United States and the world witnessed yet another gross violation of the basic human right to popular assembly and peaceful protest. A 24-year old Iraq veteran Scott Olsen, a protester in the peaceful Occupy Oaklandshot in the head during an extremely violent police crackdown on the movement. He remains in critical condition with a fractured skull and brain swelling. demonstration, was
Scott is a former marine and a member of Veterans for Peace. He served 2 tours in Iraq (although he opposed the war) and came home safe. Then, in Oakland, he was struck in the head by a rubber bullet or other “non-lethal” projectile while exercising his patriotic duty to demand a government that is accountable to its people. When others tried to help him as he lay unconscious on the ground, they too were deliberately shot with rubber bullets and flash bang grenades.
The crackdown on Occupy Oakland and the shooting of Scott Olsen is rapidly becoming a symbol for the indiscriminate attacks on unarmed civilians and the violent police repression of our global protest movement. From Athens to New York, from Barcelona to Boston and from Cairo to Oakland, a pattern is revealing itself that shows authorities desperately clinging to power through the exercise of brute force and wanton criminality. This cannot stand.
At the same time, we know that if our governments resort to violence, we must be doing something right. In just a few months, our movement has managed to uproot the implicit consensus that used to underpin the dominant neoliberal world order. By publicly displaying our discontent, by openly contesting the hegemony of financial capital, and by fearlessly challenging the criminal and corrupt elites that are supposed to represent us, we have revealed the real power relations in our society, as well as the undemocratic essence of the system itself.
Let us all keep Scott and his family in our minds in these difficult days and hope for a full and speedy recovery. Let us also not forget that, along with Scott, millions of people around the world are exposed to state violence on a daily basis. Let us remember that we are not only to be outraged at the repression of our movement, but also at the brutality leveraged against those who do not even have the luxury to speak out and protest, including many Oakland residents, who have been suffering from notorious police abuse for decades on end.
But most important of all, on this day, let us send out a powerful message to those in power: the world is watching! We will not stand by idly as you violate the very principles upon which your mandate depends. We will not close our eyes as you brutalize our brothers and sisters around the world. We will not back down. We will not give up. As Victor Hugo once wrote, you can stop an invasion of armies, but you cannot stop an idea whose time has come.
Here are a few things you can do to help us stay united against police brutality:
We are the change. We will rise above this. The world is watching.