Kleptocracy: This Was The Second Transition


[ en ] Kleptocracy: This Was The Second Transition 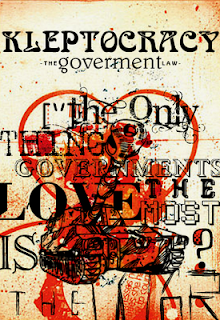 Originally published on Diagonal, nº 179, p. 33.
(Thanks to Richard McAleavey for the translation! :-)

‘The cutbacks announced by Rajoy will deepen the recession until 2013’: thus read the El País headline on the package of measures that starts off the imperial economic protectorate of the EU and the markets. The headline, however, could have been another one no less consistent or resounding: “It’s not a crisis! It’s a scam!”. After all, we are witnessing the worst extortion operation we have ever known.

Extortion, let us recall, is an ‘offence that consists of forcing –through violence or intimidation- the commission or omission of an act or commercially motivated legal transaction with a view to making money and with the intention of causing material loss to the victim or a third party’. In this case, the intimidation is that exercised by the markets, and the act or commercially motivated legal transaction is the measures approved in Las Cortes with the goal of ruining the lives of the 99% to the benefit of the 1%.

But is there really a crisis?

Struggles converge as miners, firefighters, judges, public employees, the unemployed and even the army step up their resistance against EU-enforced cuts.

On Thursday, millions of Spaniards took to the streets in over 80 cities around the country in the largest protest since the past 15th of October, just hours after the Rajoy government ratified the largest budget cuts in the history of Spanish democracy. Once again, in times of crisis, the system shows it true face: as Congress and the streets around it were barricaded by militarized police forces, the ruling party (PP) enforced its absolute majority by carrying out the vote alone, while other parties left Parliament in protest.
Government Ratifies Austerity to Backdrop of Political Turmoil
Prime Minister Mariano Rajoy arrived five hours after the debate had begun, just in time for the crucial vote. He has yet to appear in Congress to explain the actions his Government is carrying out, which include, apart from the mentioned austerity measures, an inexplicable deluge of lies and deliberate misinformation: as Spaniards learnt this week through the international media, their sovereignty (that is, the amount and conditions of a full bailout of the financial sector) is being debated not in Spain itself — but in Germany, Holland and Finland.
This new agreement, which Mr. Rajoy has failed to even bring up, implies a loan of up to 100bn euros that will fatten up the public debt even further. The deal, which will lead to even harsher austerity measures in the coming months, was simply left out of the public debate until mainstream media caught onto a document made public by the Dutch government mentioning the agreement and its possible conditions. A full review of this and other documents, some of which were kept confidential, was made public and explained yesterday by El Pais — Spain’s largest newspaper — and led to widespread criticism from different segments of the Spanish population.