Anarchy in Athens ahead of austerity vote — in videos 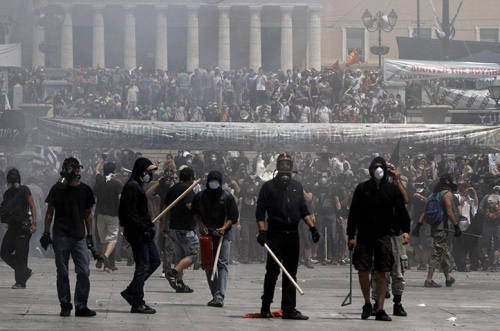 While Parliament gets ready for its decisive austerity vote, a general strike and mass riots throw the Greek capital into complete social disarray.
Just a few weeks back, we wrote on this blog that “in Greece, austerity puts revolution back on the menu.” Now, the images coming out from the streets of Athens attest that Greece is indeed on the brink of a partly violent, but largely peaceful popular uprising.
In their first effort to side with the country’s burgeoning ‘indignant‘ movement — which has now occupied the main square in front of Parliament for over a month — Greece’s unions called for the first 48-hour strike since the fall of the military dictatorship in 1974.
As a result, Greek public life has coming to a screeching halt as hundreds of thousands of protesters prepare to encircle Parliament to prevent today’s crucial austerity vote from taking place. Eighty percent of Greeks are reportedly opposed to the austerity memorandum, which is a precondition for a second EU-IMF bailout.
According to a report in the Guardian:

Doctors, paramedics, journalists, postal workers and private sector employees were all expected to join the protest. Stoppages by Greek air traffic controllers are likely to disrupt flights and ferry departures from Athens are also expected to be hit.

Yesterday (Tuesday), Athens had its first taste of what lies ahead if the measures are passed. Hundreds of thousands marched peacefully upon Parliament, but protests quickly got out of hand as riot police provoked violence from a fringe minority of protesters by firing unprecedented amounts of tear gas canisters at the crowds.
According to another Guardian report:

Within minutes the square resembled a battlezone, plumes of acrid smoke rising from burning rubbish bins as youths in bandanas, hoods and crash helmets lobbed marble slabs, rocks, broken bits of pavement, incendiary devices – anything they could find – at police.

Still, most protesters are adamant to remain peaceful in the face of these street battles:

“Our aim,” said Pavlos Antonopoulos, a ponytailed teacher who had marched through Syntagma Square with thousands of trade unionists hours before, “is to demonstrate peacefully.
“If there is violence it may well be deliberately provoked because we have heard that the aim of the government is to clear the square before Wednesday’s vote on the measures.
“That’s when we will fight the big battle, when we will try to blockade the parliament, when we will do everything humanly possible to stop parliamentarians voting through the measures.”

Despite the peaceful intentions of the vast majority of protesters, the atmosphere is tense. Thunder clouds are amassing on the horizon as protesters get ready for an historic standoff with police and politicians that will determine the very fate of the country — and with it, the entire eurozone.

A new spirit is stalking Greece. Chaos, too, is also present amid power cuts (engineered by militant trade unionists protesting the partial privatization of the public power corporation), lawlessness and a growing sense that the debt-stricken country is not only headed for economic collapse but social disarray.