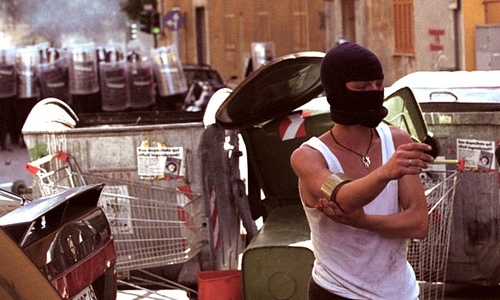 Today, it’s exactly 10 years ago that Carlo Giuliani was killed by police during the alterglobalization protests in Genoa. His spirit lives on.
The protests against the 27th meeting of the Group of 8 in Genoa in 2001 saw one of the largest mobilizations in the brief history of the alterglobalization movement.
Over 300.000 people from thousands of organizations descended upon the Mediterranean port city to demonstrate against the fundamentally undemocratic nature of global governance and the neoliberal world order.


The protests quickly turned violent and footage of the riots went around the world. What is not very well known, however, is that the violence was largely instigated by agents provocateurs, providing the legitimacy for riot police to violently crack down on the largely peaceful demonstrations.
This is not just a conspiracy theory. A number of policemen were eventually convicted for misuse of authority, constraint, abuse, intimidation, and falsification of evidence. However, they received remarkably low sentences — and the top officers were largely acquitted despite overwhelming evidence of their responsibility in the abuse.
The video below gives an accurate depiction of the combination of police brutality and pure provocation. A group of allegedly “black bloc” anarchists was given free range to burn cars and destroy private property. Images show police infiltrators talking to high-ranking officers and even giving marching orders to a contingent of riot police. These images are contrasted to the extreme violence unleashed on peaceful demonstrators.
Overall, hundreds of people were injured in the police crackdown, including journalists, medics and innocent passers-by. In a particularly brutal scene, police cleared out a school building housing activists and independent journalists, severely beating up dozens of people, many of whom were simply asleep at the time of the raid. Some people were so badly beaten they were unable to leave the building on foot.
But the police brutality in Genoa has become particularly infamous for the murder of 23-year old activist Carlo Giuliani. While the policeman who shot him in the head was eventually acquitted by Italy’s corrupt judicial system, his murder has become a cause celèbre for activists around the world.
The alterglobalization movement may have largely fizzled out in the wake of the 9/11 terror attacks (although it arguably lived on indirectly through the anti-war and climate movements), but it appears to have matured and come back in fuller and more dynamic form in today’s indignant movement, which is rapidly spreading throughout Europe and appears to be making its way to the US.
A new generation has risen to the fore, asking the same essential questions about the functioning of our political and economic system as alterglobalization activists like Carlo Giuliani asked. Why do our leaders fail to answer to the needs of the people? Why are they so enthralled to corporate interests, and those of the financial sector in particular?
Why don’t we put powerful organizations like the International Monetary Fund under democratic control and popular scrutiny? Why are we not taxing international capital transactions? Why does the state use violence in order to keep us from asking these legitimate questions and voicing our particular concerns in the public sphere?
Carlo Giuliani’s short life was abruptly ended by the brutal forces of the state, acting in defense of an illegitimate world order dominated by corporate interests. His voice was silenced before he even got to properly raise it. His questions were never answered. But his spirit of resistance lives on today in the defiant roar emanating from Athens to Madrid.
A 10-day commemoration of Carlo Giuliani, the G8 protests and the alterglobalization movement more generally is being held in Genoa right now.